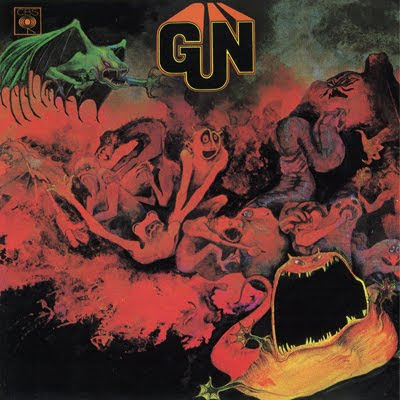 ::: Stunning stereo audience recording. Any doubts, check the samples.
::: Warts: None except waaay too damn short!
::: The recording was obviously out of phase from the original microphone setup. One channel was flipped to correct it.
::: The festival was October 22-25. I have been unable to find the correct & full schedule of bands. Can anyone help?

Nothing here ever commercially released to my knowledge. If I'm wrong, please advise & I'll take the offending trax offline.

CoolSonics 098 ::: Thanks to the original taper & traders! My copy came courtesy of the one & only Commander Brinkhoffs, many years ago, incorrectly labeled under another band name. ::: Corrections welcome ::: This one is for John Martin Thomas, one of the best friends I have ever had & the guy who turned me onto Gun & he's still listening'. And if you wonder why that Sonic Youth lick moves you & you like Gun, be glad to find out Mr Moore spent some hours spinnin' their wax as well. Once again, I spent far too much time preparing a recording... Must have been a fun festival - Guru Guru, Xhol, Embryo, Fotheringhay, East of Eden, Gun, Q 65, Quiver, Taste & many more. This is far more interesting than The Gun sessions from Top Gear & Top Of The Pops, as it is genuine live concert material, but you just wish for more. Imagine versions like this one from either of their albums. One cool thing here is how well they can pull off their vocals harmonies in the opening. I could rave about this much longer than the actual recording, but enough already. One of several recordings that have surfaced to my play piles recently from the first month after Hendrix's death. People were definitely shocked. Nice for Gunguitar riff to cover Hendrix as Jimi had just played some nods to The Gun the couple of months before his death. http://www.planetalien.co.uk has lots of info about the band. Rock on.

More recordings on the way, making up for years of slow netspeed. Kudos to Zongo for life support, Lochner for mikes & much more, & to Fast Freddie for runnin' Video Dick's Record Emporium with the bathroom office full of tape decks. Thanks to Hanwaker (few among us can keep his pace) for over 30 years of trading & friendship. Mountains of gratitude to Davmar, D.White, Sanchez, Elliot, The Florida Kid, Kloiber, Zingg, JTW, Bershaw, Boston Gold, Weeks, Dixon, Moore, Gough & SO many more for all that collecting & sharing... Royal thanks to The Man In The Palace, Doc Tinker, Brinkhoffs, Barely Eatin', Reel Master Gaule, Parrish & all the traders who housed me thru my music acquisition & travel years. Hats off to Brother Kent, Uncle Jake, Little Queenie (& her neighbor Frank) & his honor Ptomaine Thomas. Glasses raised to Byron for musical horizon expansion & much obliged to J & Thurston for keepin' my concert fires burnin' since my continental shift. Thanks to the Mods for keepin' DIME alive. Enjoy, share, give, spread peace. Yers truly, Knees